It was a simple promise.

Tina and John Gianfagna told their daughter they would carry on her legacy, and that they have. The promise has included more than 7,000 art kits designed to provide hope and healing to cancer patients. 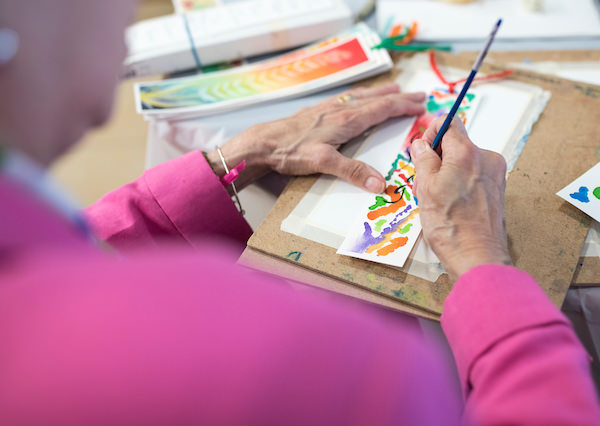 “More and more research is showing that art therapy actually helps in the healing process,” said Tina Gianfagna. But it didn’t take research to get their daughter Jeanette Gianfagna Shamblen to introduce art to fellow cancer patients in 2000. The 36-year-old wife and mother was in and out of the hospital undergoing treatment for breast cancer. During her stays, she would describe her best days as the days she could paint. She once wrote: “I live in another world for that time. A world without illness and suffering.” She extended that joy to others through “Creating Hope.” When she passed in 2003, Jeanette’s parents continued offering hope.

At the top of the stairway of the second floor, soft music fills the hallways of IU Health Simon Cancer Center. Just steps away from infusion rooms, Tina and John Gianfagna are sitting at a table with black and white sketches and colored pencils.

A young pre-teen sits down at the table. His mom is in one of the nearby rooms, getting her weekly dose of chemotherapy. John Gianfagna begins asking the boy about his career goals, his summer plans, and his life in general. For just a few minutes, the boy has a chance to step away from the scary word: “Cancer.”

It’s all part of the plan. 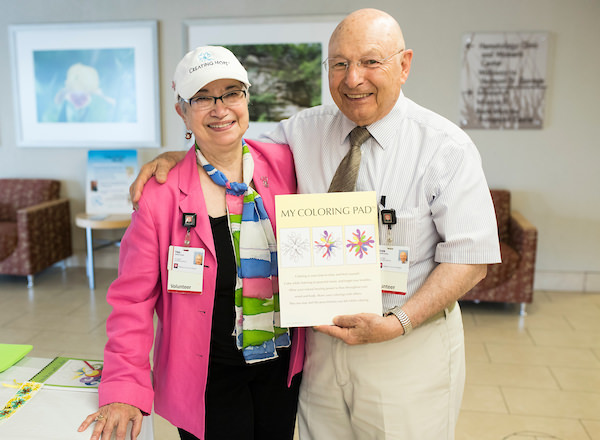 “This is a process that involves coloring inside and outside the lines. It’s about being meditative and being a kid again,” said John Gianfagna. The volunteer effort works the hospital’s “Complete Life Program” but the Gianfagnas bring in their own volunteer support. Many of the volunteers are cancer survivors who understand and appreciate the “art” of healing, said Linda Yee, whose husband Robert Yee, is a retired ophthalmologist with IU Health.

“I decided after my breast cancer that I wanted to give back and to work with patients,” said Linda Yee, who was diagnosed in 2001. A former art teacher, Yee has volunteered with Creating Hope for 14 years. “I feel like when we sit down and begin to work with art, it takes us as far away from cancer as possible. We tell people after they are finished, that they probably never thought they’d have so much fun in the hospital.”

Being an artist is not a requirement.

In fact, the final project – whether it’s a drawing or a painting – doesn’t matter, said Tina Gianfagna.