Her Husband Was Her Patient; Transplant Has Extended Her Family

It’s a popular 70s disco song by the group “Sister Sledge” that comes to mind when Mary Lynn Subrin talks about family.

“Being one of 34 first cousins raised in a five-mile radius in the Hammond-Whiting area of northern Indiana made for a great childhood. We all attended the same church and grade school and our ages range from 37-74,” said Subrin, who recently turned 56. “We have gotten married, had kids, some of our kids are having kids. We have a minimum of 200 people at our family events.”

Some have moved from the region, some remain. But they still get together each year for the annual Pierogi Festival in Whiting – an event that draws about 300,000 visitors to the community. Subrin’s yearly attendance at the festival that’s dedicated to a little Eastern European dumpling, says a lot about her personality. The family attends in part as a tribute to Subrin’s grandmother and her Slovak decent.

In short, Subrin is about family. Subrin has her own definition of how far those borders extend. As she talks about her job with IU Health that spans 32 years with a focus on pediatrics, she pulls out her phone and begins showing pictures of former patients. She talks about some as if they are her own. One of those pictures is of smiling young bride and her bridegroom. The smiling bride is Subrin and the young man in the tuxedo is her husband – one of her first patients.

Subrin attended the Marian University/IU co-op and had only recently received her nursing degree when, at age 23, she became the primary nurse for Brad Subrin. He was 21 and at the time there were only three transplant coordinators working with adults and peds. Now there are about two dozen pre- and post-transplant coordinators. She remains the only pediatric kidney coordinator.

“We had a lot of older patients – Brad was young, he was very positive, and he was just happy to be alive,” said Subrin. He had been diagnosed with dysplasia and received a kidney from his brother.

Subrin says their courtship was as unusual as Brad’s graft survival (survival with a functioning transplanted organ). “Typically, back in 1987 you’d be hoping to get 10 years out of the kidney. Now that our medicines are better, people are getting between 17 and 25 years,” said Subrin.

The couple celebrated 26 years of marriage this year and Brad celebrated 30 years with his kidney donated by his brother Barry.

When Brad hit the 20-year mark of his transplant Subrin said Dr. William Goggins, a transplant surgeon joked that the warranty on his kidney had run out. And when Subrin first met Dr. Myda Khalid, pediatric nephrologist, and told her about her husband’s kidney Subrin recalls Doctor Khalid shaking her head and saying, “He’s one of those – one that we may never know why or how but we do know that we’ve come along way with transplant.”

Back then, patients were usually hospitalized for about 30 days but because Brad was young, he was released in eight days. Subrin doubted she’d see him again. She laughs as she relates how she still keeps up with patients today.

But back then, social media wasn’t as popular as it is today, so when Brad left the hospital and was on steroids, a young Mary Lynn Subrin made a little bet. “I bet him he’d gain 20 pounds. When he only gained 17, he said I owed him dinner,” said Subrin. That was the start of a beautiful union.

Their first date was at the former Milano Inn. Their second date was at an IU game, and from there the relationship took flight. 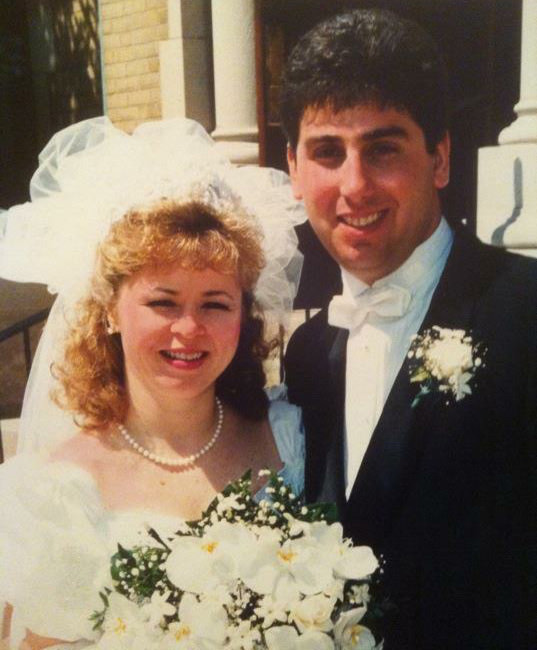 Over time, the couple became engaged and was married in 1991. Eventually they had children – daughter Elizabeth came along in 1993, and son Jacob was born 19 months later.

She speaks of her children with pride – one a graduate of Butler, a teacher, the other working at a local pharmacy. Then she begins talking about her “other kids” – the ones she nursed back to health.

“Kids just have a sixth sense. It’s like they know what’s going on even before you tell them,” said Subrin. She begins talking about her first transplant patient, Stacie. “She was 13 and we used to have to wear bazooka pink uniforms. We’d laugh about the uniforms and she taught me about my first kidney transplant, my first fistula (a cuff placed under the skin to help hold the dialysis catheter in place).”

Then there was the 3-year-old who just recently got admitted to college, and the 15-year-old who is now a nurse. Over the years she has received countless invitations to graduations and weddings, and birth announcements too. She receives notes and phone calls from families on their “transplant-aversary” dates.

“They typically come to clinic every six months to a year. We can also see them quarterly depending on what kind of course they are having, and then there are labs once a month, so I’m always chasing their labs to see if they are ok.”

In her role as pediatric renal coordinator she talks to about 100 parents or patients a month.

“Working with kids is special. You see a child who has been on a machine three times a week and then you get to help give them a normal life. I probably get too attached, I don’t know but I love working in transplant,” said Subrin.

The suggestion that she “gets too attached” reminds her how she defines her family – borders that extend beyond first cousins and grandparents.

“Being a pediatric renal transplant coordinator has turned out to be the perfect career for me,” said Subrin. “We take care of the transplanted kids from the date of transplant until they transition into ‘adult land.’ These kids in their own special way have become part of my transplant family and we have a forever bond.”