Back Home Again in Indiana

He’s covered more than 4 million miles hauling semi loads of cheese and potatoes over the past 41 years, and Ron Chappell can only remember a few times when he was scared driving on the open road. There was the time his brakes went out on a mountain bypass in Wyoming and the time a pick-up truck hit his rig three times, forcing him into the guardrail.

There was also a close call when he and his late wife, Juanita “Charlie” were passing through Philadelphia and someone tried to break into their semi and steal the haul. But none of that compares to the day he was diagnosed with esophageal cancer.

Chappell, 67, who attended Pike High School, was driving more than six hours a day and didn’t think he had time to slow down. Driving a semi was all he ever wanted to do. Eventually he moved to Texas.

“I like the freedom of being on the open road. I met a lot of wonderful people,” said Chappell. That included his wife of 19 years who died in 2002. She was also a truck driver.

Last August he began having trouble swallowing and keeping food down. He got to the point where he’d only eat a couple times a week and eventually lost about 18 pounds. 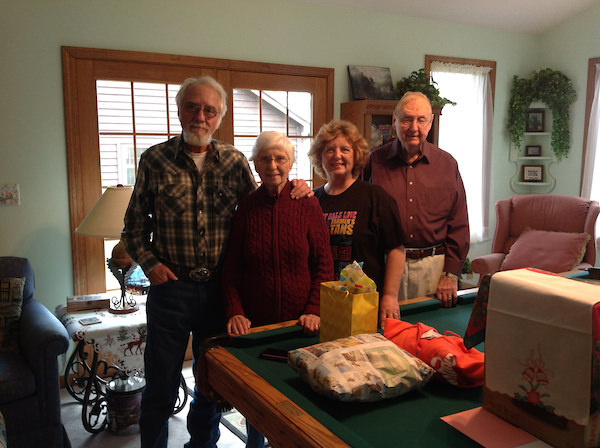 When his family members finally talked him to going to a doctor, he ended up in the hospital. An initial endoscopy couldn’t be completed because of an obstruction. Once completed, the tests showed a tumor in his esophagus. A large stone was also discovered in his right kidney.

Faced with chemotherapy, radiation and surgery, Chappell knew he couldn’t go through it alone. He moved home to be with his parents Chet and Evelyn Chappell and sister, Sharon Young, who live in Mooresville. A retired nurse, Young began making phone calls in search of the best medical team for her only sibling.

One of her first calls was to her neighbor, Pat Ingle, executive director of respiratory care and diagnostic services at IU Health Methodist Hospital. Ingle gave the family some names of cancer specialists and days later Chappell was meeting with oncologist Dr. Shadia Jalal. His first procedure was for placement of a feeding tube to build up his strength. He also met with urologist Dr. Timothy Masterson who started planning to save the kidney that might otherwise be compromised by chemotherapy and radiology. In mid-March Chappell received a renal stent to open up the arteries carrying blood to the kidneys.

Recognizing that his family lived in Martinsville, Chappell’s doctors made arrangements for him to undergo chemotherapy and radiation closer to home at IU Health Morgan. His final treatment was April 13 and he returned to Texas and back on the road for two weeks.

On June 6, Chappell came back home to Indiana where Dr. Thomas Birdas, who specializes in thoracic surgery, operated on the tumor.

“He had about a fourth of his stomach removed, areas near his esophagus and lymph nodes and his recent scans came back clear,” said Young, who along with her mother, recently visited Chappell’s bedside.

“I believe in answered prayers. With him on the road so much, I’ve spent a lot of time on my knees and this time was one we knew God was definitely looking after him,” said Evelyn Chappell of her only son. “The staff here was also looking after him. They don’t treat him like a number, they are interested in the whole person,” she said.

“From the time we walked into the hospital doors and someone helped us find pre-admitting to the day of his surgery, we couldn’t ask for better care,” said Young. “Sure it’s scary to drive a truck across country but coming into the hospital for the first time and knowing what’s ahead makes you feel lost and afraid. People here took all that away.”

And while he’s anxious to get back on the road, Chappell says he wouldn’t mind doing a little fishing and some camping and maybe even refurbishing some old cars.

His favorite? A classic muscle car, a 1966 Pontiac GTO – rested, restored and running like new.