Standing at nearly seven feet tall, Josh Adkins’ blue eyes light up when he talks about his job at IU Health.

“My co-workers are what make it worthwhile to come to work. It’s such a great team here,” said Adkins. For four years he has worked with dermatology patients both at University Hospital and Riley Hospital for Children. Many return patients recognize him as one of the first faces they see inside the office.

“A lot of people ask me if I play basketball and some call me the ‘Big Friendly Giant’ or ‘Gentle Giant,’” said Adkins. He takes it all in stride. “Most people know I’m pretty relaxed.” 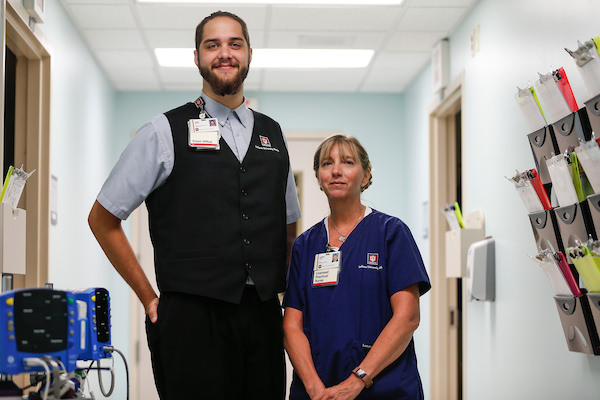 “Aside from taking care of patients, he is always helping us out in the back office without grumbling,” said Nurse Laura Kenny, who nominated Adkins for the Shining Star Award. “He’s our go-to for IT issues and patient contact. He’s just a well-rounded guy.”

Adkins, 25, a 2010 graduate of Cardinal Ritter High School came to IU Health when his mom told him about her work experience. Amanda Adkins works in urology at Simon Cancer Center.

Outside of work, Adkins likes video gaming and is a former percussionist with the Cardinal Ritter marching band.

And did he ever play basketball?

“I played for a short time but it was never a passion.”