On the day he became a US Citizen, Dr. Safi Shahda wore a red tie. Written on the tie - in white letters - were the words to the U.S. Constitution.

Doctor Shahda had been given a gift box weeks before he took the oath. The box was from a long-time patient who had instructed Shahda not to open the gift until the time he would become a U.S. Citizen. The patient didn’t live to see that day, but Shahda wore the tie with pride. The patient’s wife later sent Shahda a copy of the constitution dated 1967 that belonged to the patient when he was a student at DePauw University.

“We used to have some lively conversations about politics and the ‘American Dream.’ He would have loved to see me on that day,” said Shahda, of his patient. “It was very emotional in a good way – seeing people from all over the world taking the oath, and pledging their allegiance to the United States, and seeing their families celebrating.”

“I wanted to live here from the time I thought about coming here and doing my training. There are many opportunities in medicine and research and I wanted to follow my dreams and my passion. I can still do that but I wanted to actually be involved with the democracy that this country offers,” said Dr. Shahda, 37. “I wanted to raise my kids in a country where they have equal opportunities.”

Doctor Shahda grew up in Hama, the fourth largest city in Syria – with a population of nearly 900,000 – located on the banks of the Orontes River in west central Syria. He describes his family as “middle class.” His father was a jeweler and his mother worked at home raising five children. When Dr. Shahda was 10, his mother died of breast cancer and his father remarried.

He remembers his mother as being sick and traveling a lot – to Damascus, 150 miles from his home, to get medical treatment.

“There was no oncologist in our town so we would travel for chemotherapy or radiation. I remember toward the end she was so weak that we moved in with our grandparents,” said Dr. Shahda. He also remembers that his dad didn’t talk a lot about it – even after his mother died at the age of 33.

He had a lot of unanswered questions and a thirst to learn more.

“Sometimes you see people live that experience and they say, ‘I’m going to become an oncologist because my mom had cancer.’ It wasn’t like that with me. I think it’s more something that grew inside me.”

Part of his curiosity was fueled by living in a culture where people talked about cancer as the “mysterious disease,” for fear if they actually said the six-letter word they might become a victim of its prey.

“I didn’t grow up having a stethoscope hanging around my neck and pretending I was a doctor. My dad was a businessman but we did have people in our family who worked in the medical field so I did have some exposure,” said Dr. Shahda. “When I considered my career options, I thought about the concept of the impact physicians have on patients.”

So at the age of 18, he left Hama to attend Damascus University and medical school. Eight years later he came to the United States and completed his residency and fellowship at IU School of Medicine.

“I didn’t feel like I could achieve my goals in Syria. I was looking for better training and I knew the opportunities are limited.”

When Dr. Shahda came to the United States as a medical student he took an elective in oncology. “I was fascinated by seeing patients go through bone marrow transplants and seeing patients cured of cancer – a concept that was foreign to me based on the medical care in Syria. About 15 years ago, there were probably only about 20 oncologists in Syria. That number grew over time, but with the war, many physicians left the country.”

Back in the United States, Dr. Shahda was working at the Veteran’s Administration on an overnight shift when he met a nurse practitioner named Jessica. The couple dated for a couple of years and waited for things to calm down in Syria in hopes that Dr. Shahda’s family could join them for a stateside wedding. 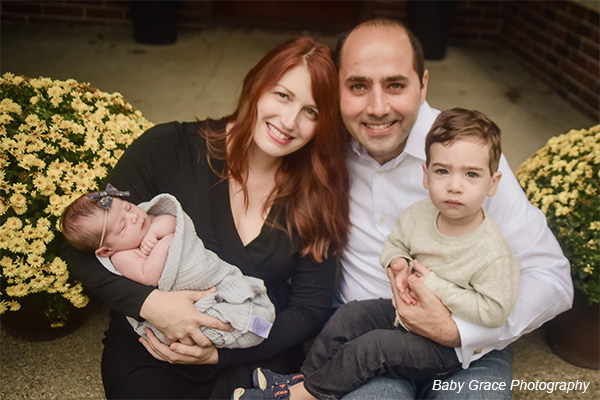 When the unrest didn’t settle, the couple decided to go forward with the nuptials and was married on October 11 four years ago. They have a young son, Hadi, 23 months; and recently added a daughter to their family, Zoe.

“Even though we grew up in different places – different cultures – we have a lot in common. We like spending our time at home, reading, traveling and cooking and family is important to us,” said Dr. Shahda. “When I decided to come to the United States, it was a big decision to leave my family and risk not going back.” He hasn’t returned to Syria since 2008 and has missed many family events including the funeral of one of his brothers, and his sister’s marriage. He keeps in touch with his family via Skype and focuses on his purpose as a new US resident.

Much of that is patient-centered.

He remembers the highlights – like leaving the hospital after a long day and receiving a picture of a patient who was playing guitar with his band. The patient had been treated for cancer and recently discharged. And then there was another patient with Stage 4 colon cancer, who responded well to a clinical trial.

And then there’s the patient who gifted Dr. Shahda with the tie that he wore to his oath of citizenship.

“There are things some people take for granted growing up here. They don’t understand how important and impressive the election process is – they don’t understand you can actually have candidates that grill each other and they both go home alive. I watch late night comedy and it’s impressive to see former diplomats - including former presidents - getting questions and even made fun of by comedians. This is a real freedom of speech and a real democracy.”

That’s why, he says, his oath of citizenship was so emotional.

“It’s a lengthy exhausting process going though paperwork and the vetting process to become a citizen. So for me thinking about what life would be like if I weren’t here, is something I can’t imagine,” said Shahda. “I can’t image being able to do this – to pursue my dreams anywhere else.”

What does he see as the future of oncology research and medicine?

“My hope is that we would have fewer patients getting cancer by implementing intervention, but realistically we will have more people living longer with cancer because of advanced medicine. My hope is that we can help people have the best meaningful life while they live with cancer.”