Sitting in the IU Health Simon Cancer Center getting chemotherapy, an NFL long snapper popped in to say hi to John Danyluk. Danyluk was battling breast cancer and Indianapolis Colts player Matt Overton was there to cheer him up.

“Matt is an amazing person who gave not only John, but others fighting cancer the motivation and courage to fight,” said Cathy Danyluk, John’s wife. “He always cheered John up and gave him the spirit boost he needed.”

When the Colts released Overton this week, there was lots of talk of his devotion and love for Riley Hospital for Children. But quietly and with little fanfare, Overton was there for the adults, too.

His first visit to Simon Cancer Center was with Colts teammates in late 2012, the day after their coach Chuck Pagano was diagnosed with leukemia. Overton came to the cancer center every year after. 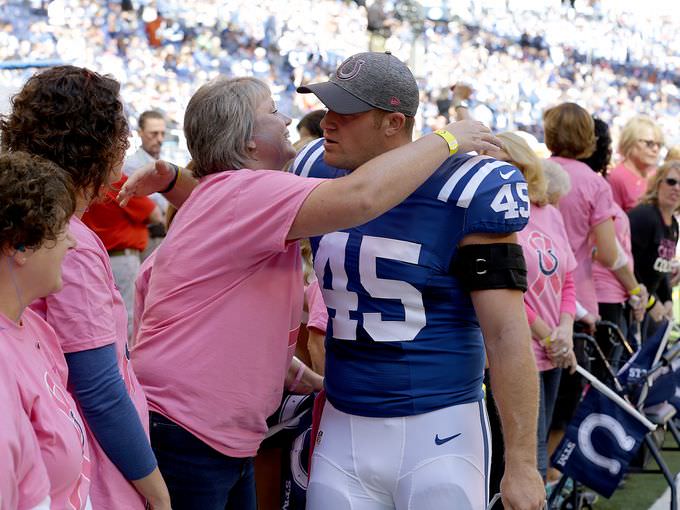 He also was a big part of the NFL’s “Crucial Catch” campaign, which highlighted breast cancer awareness in October. During Colts games at Lucas Oil Stadium, Overton could be found hugging women in pink on the field.

One year, he also went over and hugged a man – Danyluk.

John Danyluk passed away last year and, after his death, Overton made clear who the real hero was.

“Cancer is cancer. It's something that John embraced head on,” Overton said. “And he showed tremendous character and determination throughout the fight.”