From Court Room To Waiting Room

The way Ellen Corcella sees it there are similarities between proceeding over a criminal trial and ministering to a terminally ill patient.

“It takes a lot of courage to talk about death,” said Corcella, 60. “As a prosecutor you had to talk someone about guilty for a major crime. It takes fortitude to step into a room and meet someone at their worst time.”

There is a sort of involuntary nervousness that comes with both situations, said Corcella, who grew up in Lexington, KY. at a time in history marked by the American Feminist Movement. She attended Catholic school through 10th grade, setting the foundation of her faith.

“I was very influenced by the social justice part of Catholicism - the martyrs and the saints – the idea that people lived by principal as opposed to being lured by the temptations of the world. I wanted to be like them, but I didn’t want to be a nun,” said Corcella, the oldest daughter of a nurse and physician.

Becoming an attorney was not a tough choice, she said.

“I have a thing about advocating for people and I was always enamored by Perry Mason shows and books about Harriet the Spy.”

She graduated from Georgetown University and became a prosecutor in the Manhattan District Attorneys office. When she moved to the US Attorney Generals Office in the eastern district of New York she crossed paths with organized crime mobs and some of the most highly publicized cases in the country.

“Those tough cases are what helped mold me into the person I am today,” said Corcella. “If you are going to trial in a New York City courtroom you better learn how to be tough real fast. I saw how crime created a lot of victims and was devastating to a community,” she said, relating that a crack epidemic of the 80s resulted in thousands of murders a year.

But that tough-as-nails exterior fades as she pauses to talk about the transition to chaplaincy. The same pause she says is one that she practices before entering a patient’s room.

“There is that temptation like ‘so I really have to face this today?’’ She is talking about death.

“We are always talking around the subject. No one wants to talk about death,” said Corcella. “As a lawyer, I’ve learned to face the real issue. It’s not always about death with a parent, but about the fear and anxiety of a child lying in a bed suffering.”

She’s learned first-hand about a mother’s unconditional love through personal experience. She was single and in her late 30s working 60-80 hours a week on high stakes trials when Corcella decided to adopt a child from China. She spent 18 months on the adoption process and moved to Indiana shortly after the papers were signed.

“I was handed this little bundle who had been in an orphanage for the first year of her life. She was crying and I thought ‘I’d cry too if I were her.’ It was a miraculous sensation becoming a parent.” She quickly realized her professional life was not compatible with her personal life.

“I brought her back to New York and I realized even in a less than 700-square-foot home and a decent salary I couldn’t afford to live in New York,” said Corcella. So she called a Fort Wayne FBI agent that she had worked with on a case and eventually moved to Indianapolis. She worked for the Marion County Prosecutor’s office for a time and then started her own practice. 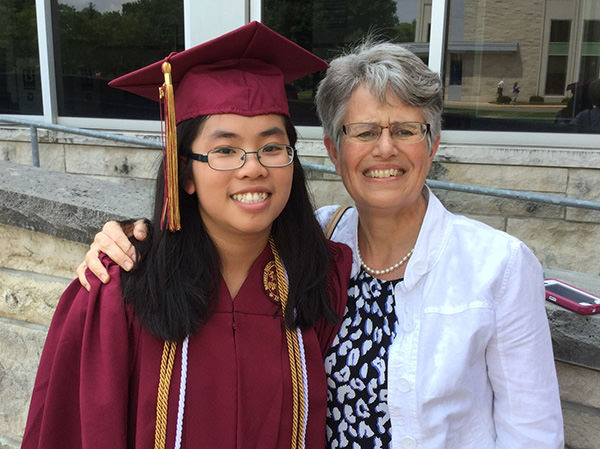 Something else started happening.

“When I first got my daughter people would tell me she was chosen for me. I didn’t believe it but as I grew into parenting I began to marvel at how I could go all the way to China and get such a beautiful girl so perfect for me,” said Corcella. As her daughter, Kathleen, became a young adult she began to open her mother’s heart to possibilities.

“She is left-handed like me, she wears glasses like me and she is good natured and bright. And she has also shown me how to interact with the world and not be so cautious. The notion of the blessing started to impact me,” said Corcella. A recent graduate of Brebeuf Jesuit Preparatory School Kathleen is now 18 and starting her first year of college.

“I think the one thing she’s learned on her own is that values are more important than things. I think by seeing me let go from the privilege and money that comes with being a lawyer to where we are today we both learned we could survive by grace and love. It helped us focus on what is important in people’s lives. Working to serve others,” said Corcella, who earned a Masters in Divinity and Theological Studies from Christian Theological Seminary.

For the past two years, she has been enrolled in the chaplain residency at IU Health.

“When I first came here and I saw the sign on the Methodist chaplaincy door with the words ‘ethics, values, and social responsibility,’ I knew I was in the right place,” said Corcella. “We really get to walk the path that Jesus walked. He meet people where they were – walking with the poor and disadvantaged, those who are struggling.”

Working with other chaplains and care teams she has ministered to families, staff and patients – both adults and children.

“It is amazing to minister to people at such an intimate level. I feel like this is where I’m meant to be, what I’m meant to be doing – meeting and talking to others heart to heart and helping them get through their toughest times.”

Acting as an ecumenical spiritual caregiver, Corcella administers communion, performs baptisms and prays at the bedside of those who are terminally ill.

“I try to learn a verse or learn enough from the family to talk about love between family. I may find a biblical passage that resonates with the family,” said Corcella. “I always have them hold hands with the patient and hold hands around the bedside and I usually talk to the patient as though they can hear me. I think that’s so important.”

With all those she meets Corcella says she wants them to be reminded of one thing:

“I tell them the greatest commandment is to love God and love one another.”