Joseluis Gonzalez doesn’t like long-distance running. He likes to sprint. But when he was diagnosed with testicular cancer, his father told him to prepare for a marathon.

On May 10, the day after his last college final of the semester, he had surgery to remove a tumor and two weeks later he started chemotherapy. Today, he completed his 26th and final infusion.

“He reached the final mile marker,” said his dad, Harold Gonzalez, who along with his wife, Elizabeth Gonzalez, has been by their son’s side throughout the marathon.

When Joseluis started his treatments, he named the process “The Summer of Chemo” and chronicled the journey through his art. He filled a sketchpad with imaginative drawings and painted landscapes as a way to cope and express his feelings. His work earned him a reputation at IU Health Simon Cancer Center and local television stations interviewed him about his creative inspiration. 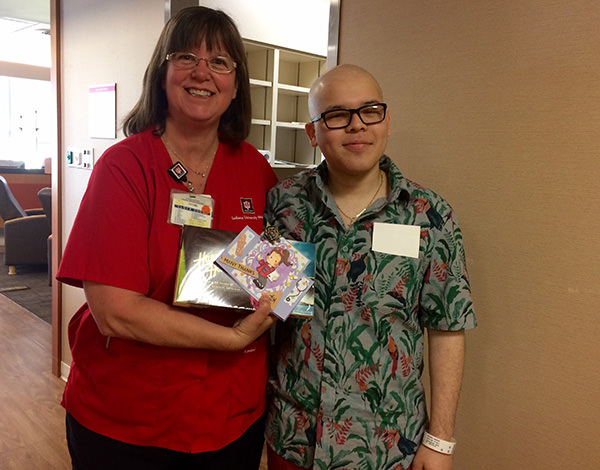 “Cancer doesn’t have to be news that means it’s the end of the world. You paint it much worse in your head. I tell people, take what you’re thinking times three and then erase it. And if your outcome is different, then don’t be scared,” said Gonzalez.

As he rings the bell to signal the end of his treatments, he looks forward to the end of summer, the end of chemo. August means a new season.

He starts his second year of college at Ivy Tech on August 22 majoring in criminal justice and turns 20 on August 26. He’s eager to return to work at the Duluth Trading Company and to eat some of his favorite foods - sushi and burgers piled high with fresh produce.

As she gave Gonzalez a hug and wished him well. Nurse Julie McGugan said: “He’s been amazing. He’s been so encouraging to other patients and so upbeat. He’s a real rock star.”