He Wants Patients To Know They Are Superheroes

He wears a Superman medallion around his neck. But it isn’t because he thinks he possesses some supernatural, superhuman powers. The simple gold charm reminds Lorin Harris that there’s something heroic in all of us.

“My passion is people and I believe everybody needs a little hope,” said Harris, a patient care assistant in the behavioral care unit of IU Health Methodist Hospital. “No matter what my struggles are in my personal life, there’s always room for me to come in for 12 hours and care for others and help uplift their spirits – whether it’s deep pain, a new diagnosis or to celebrate their good news.”

His path to IU Health is, perhaps, one of the reasons his conviction is so strong. In 2009, he left the United States and moved to the smallest country in Central America, El Salvador. At first the move was intended as a short-term mission, but days turned into weeks, weeks into months, and months into years.

Living in the community of Los Heroes was no coincidence, said Harris, 32. It gave him the opportunity to create a program based on super heroes – one way of relating to children of impoverished families. 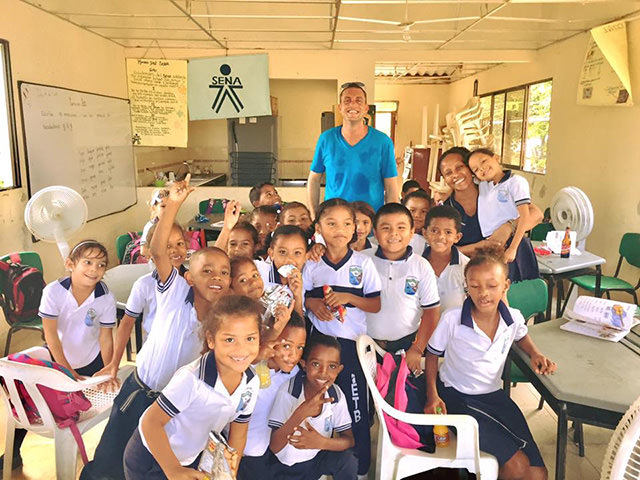 He was there to make connections, to create relationships. So he built houses and then he helped build a school.

“When I left the United States, people asked me what I was going to do. I hadn’t had a lot of experience with a hammer. But when people need help, I’m here to help,” said Harris, who speaks fluent Spanish.

He sees himself in the role Michael J. Fox played in the 1993 movie, “For Love or Money.” Fox portrays Doug Ireland, a concierge of a ritzy hotel in New York who does what needs to be done to help the guests. “I’m like a concierge when it comes to helping people. If that means building a house for a family of six, you decide you can do it and you do it. If it means helping a patient eat, then you do it,” said Harris.

For the past three years, Harris has volunteered stateside with Bridges of Hope International, an organization focused on bringing hope to Central and South America through short-term mission trips and international partnerships.

“I have a heart for people suffering from poverty – even in Indianapolis. I don’t feel like everyone has to go out to different nations to develop that passion,” said Harris. “I thought God had me in that place at a certain time and now I think he’s given me the blessings of serving here now.

“My entire life I’ve worked with some amazing doctors and nurses who have made me feel comfortable in the hospital setting. I am constantly overwhelmed by IU Health – the size and the amazing attitude of the people who work here.”

And at the end of the day, what’s most important to Harris is this: “I want my patients to know that their lives are precious. That they are loved - even if they have a bad family situation, or they’re not sure they will recover, they are a human being and they are loved.”