It Started As A Tiny Spot

At first she didn’t think there was much cause for alarm. Greenwood resident Theresa Siefker, 71, described the spot on the left side of her face as a pimple. 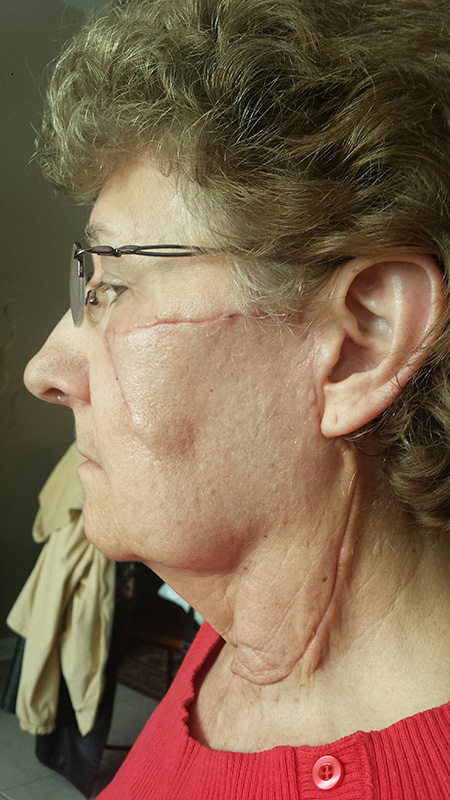 But after about a month, the spot started turning blue. She first visited her dermatologist who told her the spot looked more like a cyst. A Mohs procedure was performed to remove the spot. Mohs is a surgical technique to treat skin cancer that allows doctors to remove layers of skin and test each layer for cancer-free tissues.

The testing revealed something larger than a pimple. Siefker had enlarged lymph nodes and was diagnosed with merkel cell carcinoma, an aggressive skin cancer.

“They said normally the merkel cell cancer happens to people later in life and could be because of over exposure to sun in younger years,” said Siefker during a recent follow up doctor’s visit. She received a clear pathology report after her two-hour surgery and continues to see Dr. Goldenburg every four months. Otherwise she is enjoying her retirement. She and her husband Bob have been married for 50 years and have two adult children. Siefker enjoys sewing and traveling.

“Recurrence rates are fairly high for this type of cancer,” said Goldenburg, adding the series range is from 25-40% recurrence in five years for early stage cancers.