Letter From ‘The Nose”

In Gina Dewell’s words, she was “very dramatic.” Dewell was beyond scared and yes, she says she was “what a doctor might call ‘that kind of patient.’”

It was last summer when Dewell, 42, entered the offices of dermatologist Ally-Khan B. Somani. She was scheduled to undergo Mohs surgery, a micrographic procedure to remove skin cancer, layer by layer. The surgery is the only treatment that allows doctors to evaluate the skin cancer cells during the procedure and a surgery that results in a high cure rate for patients. Somani is a fellowship trained Mohs surgeon. He has seen a many types of skin cancer and has learned to work with tumors in challenging locations – including the nose. He also has experience in complex wound reconstruction. 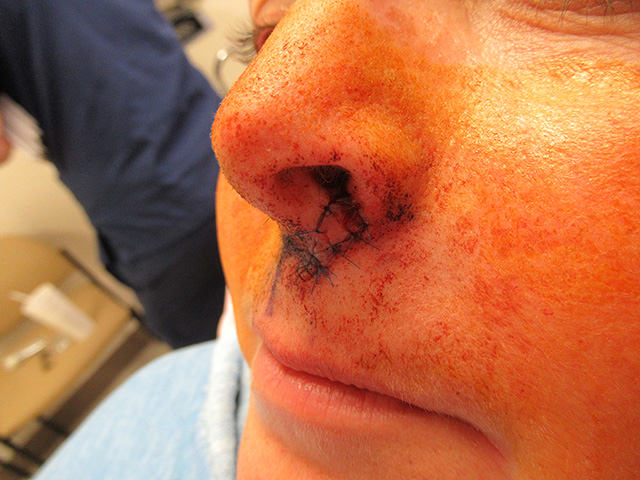 But Dewell didn’t think about any of that when she entered the offices of Somani and his staff. She thought about the pain of the procedure and how badly her face might be disfigured.

About seven years had passed since Dewell first noticed a small bump inside her left nostril. It wasn’t hurting or bleeding. It just wasn’t going away. Last summer she felt like the spot was getting bigger, more like a cyst, she said.

“I have had some bad health experiences – three difficult pregnancies; a gall bladder removed, and kidney stones,” said Dewell. “I haven’t always had the best care under important stressful procedures so I go into every medical setting with a baseline anxiety.”

She also asks lots of questions.

“Some doctors will answer them; some are not so excited,” she said. This time she needed answers. The procedure was being done on her face and in her mind it could mean the difference between a healthy face and a healthy and happy face.

“I’m not a real vain person but let’s face it, I didn’t want to leave the office looking awful,” said Dewell, a former teacher. She recalls telling her third-grade students about the surgery and they asked: “Are you going to have a new nose?”

She entered the office around 8 a.m. and didn’t leave until after noon. The Mohs procedure is performed while the patient is awake. Local anesthetic was applied to numb the area and Dr. Somani began his work – removing the first layer of cancerous skin.

“Anyone can remove skin cancer but the Mohs surgery is the only procedure in medicine that literally looks at 100 percent of the bottom and edge of what has been removed,” said Somani. He compares the testing to a Reese peanut butter cup. The area in the center and around the cancer all the way to the edges of the “wrapper” are tested and reviewed.

“Patients come in with cancer and on the same day they leave with reconstructive surgery and no cancer,” said Somani.

Dewell’s anxiety was heightened by the uncertainty. “Will there be one layer removed? Two? Three?” she wondered.

But what she remembers a year later is that what could have been a routine surgery to the medical staff was anything but routine.

“I was ‘the nose’ that had ‘basal cell carcinoma’ in the medical chart but when I was going through the procedure, I was a human who mattered. They treated me with such respect and compassion,” recalls Dewell. When her anxiety heightened, Dr. Somani asked what year she was born and promptly started playing a popular tune from the era - the Eagles’ “Hotel California.”

In the days following surgery, Dewell experienced some swelling and pain, but a year later, there is barely a visible mark where the cancer was removed.

What has changed the most is Dewell’s commitment to taking precautions in the sun.

“As a kid, I didn’t lather up in baby oil and bake in the sun like lots of people did, but I wasn’t consistent in wearing sunscreen either. It was mostly something we put on when we went to a water park,” said Dewell.

“We are an outdoor family. We hike, I garden, walk our dogs; I love the beach,” she said. But now, she adds a thick layer of sunscreen and sits beneath an umbrella at the pool or her sons’ sporting events.

“This has changed my life 100 percent. I bought a hat, I wear sunglasses and all I asked for at Christmas was bottles of sunscreen,” said Dewell, the mom of three boys. “I have three fair-skinned boys and every day before we head to the ball park, we put on sunscreen. When they whine, I remind them what mommy went through. I want them to get into the habit themselves.”

Months after her surgery, Dewell wrote a letter to Somani and his staff.

“Am I grateful you removed the cancer? Heck, yes I am,” she wrote. “But most importantly, you helped me learn to trust doctors again . . . words can’t express my gratitude for your excellent care and the compassion I received.” And she signed the letter, “The Nose.”