Not many people can say they worked on a fishing boat, battled forest fires, and work in a communications center directing LifeLine ambulances and helicopters on emergency runs. Not to mention having “an office” just a short distance from the home of the “greatest spectacle in racing” – the Indianapolis Motor Speedway.

“I’ve always been curious by nature, and I’ve always had two jobs since I was about 20. I like to stay busy and I like variety,” said Mark Chipman, 51, who was born and raised in Southern California and moved to the Midwest 17 years ago. He joined the IU Health LifeLine team two years ago as a Critical Care Transportation Specialist. In his role, Chipman responds to calls for service, categorizes each call as a “Critical Care Transport;” “Advanced Life Support;” or “Basic Life Support” and then summons air or ground emergency crews to the scene.

An outdoorsman most of his life, Chipman joined the California Department of Forestry right out of high school as a firefighter. His territory was defined primarily as mountainous regions where his focus became fighting brush fires. On the weekends he worked as a deckhand on and 85-foot fishing vessel.

“I loved the adrenaline rush of hiking up the side of the hill and fighting fires but I also love the beach,” said Chipman, whose primary job aboard the boat was helping vacationers on the five-hour day trips – everything from baiting hooks to filleting the catch.

“My ultimate goal was to become a boat captain. I love the ocean,” said Chipman. But his wife of 26 years, Linda, had family back in Indiana so they made the move to the Midwest. He continues to work as a part-time firefighter for White River Township in Johnson County. 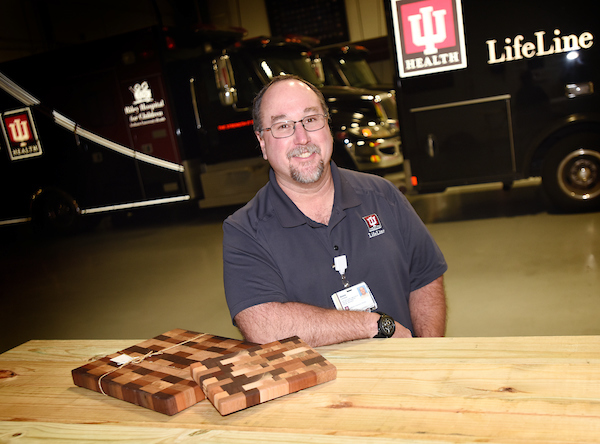 When he’s not fighting fires or working command central for LifeLine, Chipman is busy in his workshop creating something beautiful from an ordinary piece of wood. Students at Hamilton Southeastern and Westfield Schools use his custom-made picnic tables, and he even made a picnic table for the Gasoline Ally LifeLine Operations Center. At home, his craftsmanship is displayed in a fireplace and built-in unit. He’s is in the process of designing a walnut countertop kitchen island and his wife has requested a coffee table and end tables constructed from the leftover wood.

It’s his cutting boards that keep him the busiest.

“I have people calling me weekly asking for cutting boards,” said Chipman, who sells the smooth grained boards at local craft fairs under the name “Woodchipperz.” He credits his wife with starting the cutting board brigade – when an attempt at creating a checker board didn’t turn out to Chipman’s liking his wife salvaged the piece as a cutting board.

But his craft actually started when he was in high school and learned basic woodworking in a shop class.

“They say practice makes perfect. I’ve met a lot of people who have told me about the different wood specialties and I’ve watched a lot of YouTube videos,” said Chipman, who is a dad to one daughter and a son. He also has two grandchildren.

“I work with walnut, cherry, white oak, maple, hickory, and just started with some Kentucky coffee. It takes lots of glue, lots of clamping, and lots of sanding to get the perfect look.”