More Than a Tour Guide

Anthony and Kelli Sorg stood over the tiny figure resting inside the NICU room at Riley Hospital for Children at IU Health. Their days-old baby, Caisley, was fast asleep, awaiting surgery for a shunt as they fussed about putting a hat or a bow on her tiny head. The decision may have been one of the easiest they’ve made in a given day at NICU.

Kelli Sorg was 21 weeks into her pregnancy when an ultrasound revealed their third child would be born with spina bifida, a birth defect where there is incomplete closing of the backbone and membranes around the spinal cord.

It takes a special person to understand the angst that the Sorgs felt when they learned their child would be born at IU Health Methodist and a short time later would be whisked off to Riley NICU. 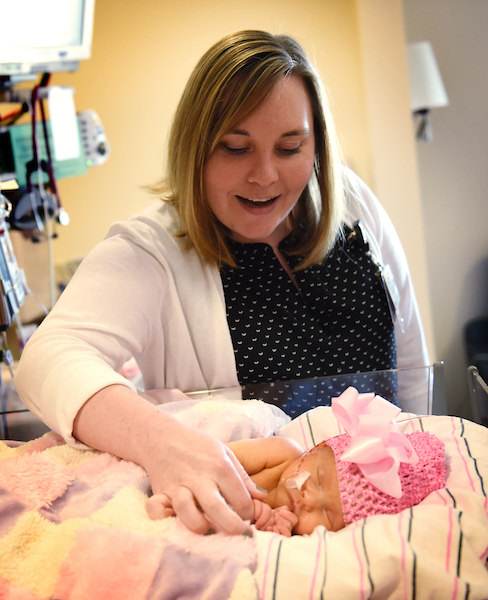 Espinosa’s son, Adrian was born at 26 weeks and weighed just over one pound. He was in NICU over a year. He just turned five and continues to use a feeding tube, but otherwise, he’s a typical boy who loves to ride his bike, enjoys all things Disney, and is planning to start Kindergarten this fall.

But the first year of Adrian’s life remains clear in Espinosa’s mind. It’s how she relates to other families stepping foot into NICU for the first time.

“The first time I saw NICU I was in a wheelchair right after my son was born. I was only 22 and I was scared,” said Espinosa who has worked as a family support coordinator for a year. “It’s such a sensory experience. You walk in and hear all the beeps and see all the things that your baby is hooked up to.”

Her job as a family support coordinator is to help take away the shock factor.

The Sorgs met Espinosa about three weeks before their baby was born.

Like most families that Espinosa sees, the Sorgs received a tour of IU Health Methodist Hospital Labor and Delivery, Postpartum, NICU, and Riley Hospital NICU. They were provided with behind-the-scenes information about hospital check in, how to navigate, and where to eat.

“Typically, when I meet families for the first time they’ve already had an ultra sound and they are waiting for a tour of campus. Ninety percent of the time they’ve never even been to the campus,” said Espinosa, who obtained her degree in Spanish and International Studies from Indiana University. She says it’s a bonus that she can converse with Spanish-speaking families.

“I think back to how I felt. You are worried about parking, where to stay and finances even before you enter NICU.” As a certified financial navigator she also helps answer questions about commercial insurance, Medicaid and other healthcare costs.

“I think Courtney’s story helps normalize the experience for families,” said Susan Henderson-Sears director of the NICU Nest family support program. “Parents talking to parents just makes sense. We’re just another layer of support like social work and chaplaincy. I don’t think you can put enough support under families with a sick child,” she said.

Many referrals come through the Prenatal Diagnosis Clinic at IU Health University Hospital, said Espinosa. And many times she meets mothers who are on bed rest and are patients at Methodist Hospital. She begins the journey of parenthood at the mother’s bedside, talking, working on crafts, and answering questions.

“I actually had a mom who was a patient at Methodist for two months on bed rest and now her daughter has been at Riley for three months. You click with those families because you know what they are going through and you care,” said Espinosa. One of the biggest worries her moms have is how long they will have to wait to see their baby if the baby is transferred to Riley. “That’s usually the point in the tour when they cry. I can feel that pain with them,” said Espinosa.

“People come from all over the state. Think about a family coming from Fort Wayne with a baby born at Methodist, who then goes to Riley,” said Espinosa. “They are far from home and many have other children in the family. It can be daunting.

“We tell families, ‘everyone is worried about your baby – the doctors, the nurses, all the staff – we are worrying about your family.’”

-- By T.J. Banes, Associate Senior Journalist at IU Health.
Reach Banes via email at T.J. Banes or on Twitter @tjbanes