New Kidney Is Her Crown

She had only been out of surgery a couple hours but Joy Araujo couldn’t stop smiling. From her hospital bed at IU Health University Hospital she talked about how tired she was. But sleep eluded her.

“I was awake all night praying,” said Araujo, 29. On Sunday night, July 30 her mind raced. The night before that she stayed up late filling her suitcases with tailor-made formal wear, fitness fashions and an opening act costume. She was on her way to West Virginia to represent Indiana in the US Miss International Pageant. All of that came to a halt with one phone call. After a four-year wait, Araujo received the news she had hoped for – she was getting a new kidney.

At age 10, Araujo was diagnosed with C1q Nephropathy, one of many diseases causing Nephrotic Syndrome, a kidney disease that leads to large amounts of protein lost in the urine. At age 17 she received a transplant. But at age 25 her body rejected the kidney and she started on 11 hours of peritoneal dialysis daily.

While she waited for a new kidney, she founded a non-profit organization - the Donor Appreciation Network. Each month she visited University Hospital to deliver white boxes filled with commemorative medals, gas cards, and hand-written “thank you” notes to kidney donors. And while she waited she participated in pageants – using the platform to show appreciation for kidney donors.

But on Monday, there was no more waiting. She completed her final dialysis at 5 a.m., and was in surgery two hours later.

“All I knew was that it was a young deceased donor. I just had to wait to see if was a match,” said Araujo. “I saw the kidney and I kept thinking, ‘all this trouble for such a little thing.’” Her transplant surgeon was Dr. William C. Goggins. 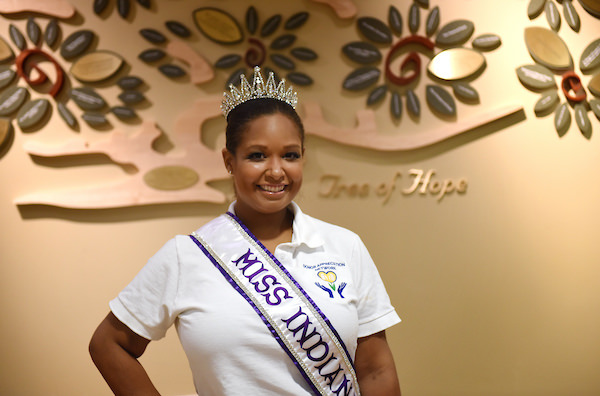 That “little thing” amounted to something bigger than a pageant crown.

“She won the lottery. Not only is this is life-prolonging procedure; it makes her life a lot easier. She doesn’t have to do dialysis anymore,” said her doctor Tim Taber, a nephrologist. Through blood transfusions and her first transplant, Araujo’s antibodies were high. Having a high number of different antibodies towards different tissue types could pose a risk for rejection if the match isn’t right. Not only was the kidney a good match but also Araujo was in good health. She had been working out in preparation for the upcoming pageant.

“When you are healthier it makes it easier to go through the procedure and it can help in recovery,” said Taber.

As she went through surgery, her sister Dawn Araujo-Hawkins, who had driven overnight from Kansas, waited with Araujo’s mom Tina Parham-Araujo.

“The feeling is indescribable,” said Parham-Araujo. “She isn’t just my daughter but she’s also my best friend. We live together . . . we do everything together. I’ve always joked that the transplant would happened right around pageant time and my car is still packed with her wardrobe.”

So what’s next? The mother and daughter already have plans to travel to Las Vegas and to see the Grand Canyon this fall. In the meantime, Araujo has something more pressing on her mind. She wants to wake up in the morning, watch the sunrise, listen to the birds and not worry about interrupting sleep with dialysis. And there’s something more: She wants a milkshake.

“I couldn’t have milkshakes before because the phosphorous is not recommended,” she said. Kidney-friendly diets generally suggest patients cut back foods high in protein, potassium, phosphorus and or/sodium.

And what about the pageant?

“The show goes on. There will be more pageants,” said Araujo. “For now, all I can think about is how miracles do happen. I have a new kidney, a new start.”