For some, Dominos come to mind – one falls and causes another to fall and so on. Others describe the connection as something similar to those colorful construction paper chains students link together to decorate their elementary classrooms. And a few even talk about the famous Rube Goldberg machines – best known for accomplishing simple tasks through a chain reaction.

In the case of kidney transplant, the task isn’t simple, but the chain can begin with one person through the Advanced Donation Program.

Like a stone tossed into a pool of water, the first donor in a long chain that includes IU Health’s University Hospital was a woman who now lives in Australia.

Mellissa Roemer lived in Champaign, Ill. at the time she donated one of her kidneys. It was last December and Roemer was preparing to move from a city about 124 miles west of Indianapolis to a country more than 9,000 miles away where she was enrolled in a graduate program in business. Not only did she have the cross-continent move on her mind, Roemer was anxious to donate her kidney to a friend. But after months of testing and preparing, Roemer learned in June that the timing wasn’t right for her friend to receive a kidney. She was presented with another option – Advanced Donation.

The Advanced Donation Program (ADP) involves pairing donated kidneys with recipients – separated by time. It’s sort of like investing money in a bank. Those who donate a kidney refer to it as a “voucher program.&rdqurdquo; Even though their intended recipient may not receive a kidney for months or even years – there is an organ added to the National Kidney Registry.

“I had already made my decision to donate and I had a personal deadline. I was moving,” said Roemer, who just turned 28. “I had no idea who was getting my kidney, but if they had their name on a list then they had a need. Maybe she is a student like me or maybe she is a grandparent like my friend. I felt if I was willing to donate for my friend, then why wouldn’t I do it for someone else.”

On July 10, Roemer traveled to Indianapolis and was admitted to IU Health University Hospital. Her kidney donation set off a chain that included transplant procedures and organ donations between various hospitals including Johns Hopkins and Cornell University.

The only thing Roemer knew about her recipient was that a thank you note was posted on a Facebook page. But she also knew her friend and former co-worker was on the list to receive someone else’s kidney.

“Mellissa is a perfect example of advanced donation. If she had donated to her intended recipient, it would have resulted in a single transplant,” said Tracy Perry, a living donor transplant coordinator with University Hospital. “Because of Mellissa’s advanced donation she was able to start the chain that involves transplants to 13 or more people.” 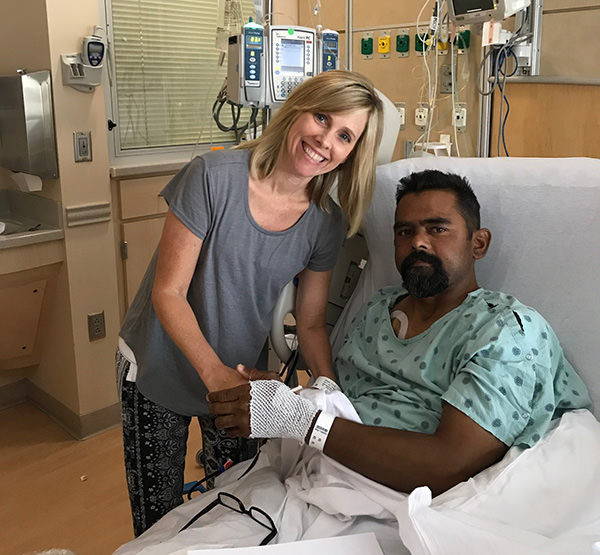 Indianapolis resident John Parker, 45 was one of those recipients. Parker’s family friend, Tina Weigel also donated her kidney through paired donation. A patient at Cornell received her kidney and Parker received a kidney donated through Johns Hopkins.

Born with kidney disease, Parker had been on dialysis for 17 months awaiting a new kidney.

“I would have died without it,” said Parker. His only son, Johnny, 15 created an Instagram post about his father’s declining health and Weigel learned of the post from her son, Caleb, also 15. At one time the boys were on the same football team coached by the elder Parker.

“I had a friend several years ago who donated a kidney to her friend and I wondered then if I could do,” said Weigle, 48, and the mother of four. “My intention was to be a match to John Parker but since we weren’t compatible, I was told about the Advanced Donation Plan. I thought ‘of course – if I was donating to him why wouldn’t I donate to someone else?’ All I know is it went to a female in New York. I don’t know her name and that’s OK.”

“Every donor I have met says ‘I’m not doing this for the attention.’ They are very humble. They are Angels,” said Perry. “When we have a donor that goes into the National Kidney Registry, their organ becomes available to anyone. What we would normally do is run the transplant list and see who is at the top of the list,” said Perry. Donors in Advanced Donation have donated just months before the intended recipient was transplanted or 20 or more years before the intended recipient is expected to need the organ. In that way, it’s a sort of assurance that their intended recipient will always be in line for a transplant.

The National Kidney Registry is the largest living donor pool in the world. The larger the pool of donors, the better the matches.

According to the National Kidney Registry, “If a single center program cannot repair a failed swap, the patient whose paired donor has already been donated is left without a kidney.” Through Advanced Donation, there is a sort of safety net for recipients who may run into complications with a single kidney donation.

It’s Perry’s job to help educate donors and recipients on things such as - there is no guarantee that the patient can be matched and transplanted; the donor may identify one intended recipient; the recipient may have up to five donors and can be at different centers, but those centers must all be a participating Advanced Donation center.

Those people Perry affectionately refers to as “angels” and “heroes,” are also referred to as “Good Samaritan Donors.” They are essentially donating their kidney to a stranger, knowing that the surgery will be completed within their donation timeframe and that the patient they help will receive the best match possible through the National Kidney Registry.

That decision is a personal one and is ultimately up to the donor.

“It’s my philosophy if you have something that can help someone else then that’s what we’re called to do – whether it’s with finances, spirituality or health,” said Weigle, who is director of the Hendricks County Life Centers. Even though she lives just a few miles from Parker, he did not know that she donated a kidney on his behalf until after her surgery. “Now I feel like we have a life-long connection,” said Weigle.

Roemer describes her family members as “cautious but supportive.”

“Here I was packing up my things and moving from a small town in Illinois, all the way to Australia. It shows that I think it’s important to take a few risks and when it comes to helping others, it’s just what you should do,” said Roemer.

She wrote the following letter to her recipient:

“To the person with my left kidney - I hope by now my gently-used and well loved kidney is well installed and doing its job. I hope that you are able to look at life differently, with new plans for the next few years. I hope you are happy.”

She may always wonder about certain things – how old is the recipient? Is she a mom? Does she like to travel? Is breakfast or lunch her favorite meal of the day?

But in the end, Roemer says all that really matters is that not just one life, but many lives will go on because of multiple donations.