She’s a breast cancer survivor. Her husband is on dialysis and awaiting a kidney transplant. Michele McCorkle gets it.

“When a patient talks about sleepless nights, paying for parking or just every day stress, I know how they feel,” said McCorkle. She had been on the job as a social worker with IU Health for only two hours when she got the call that she had breast cancer. That was November 10, 2015. Since then, she’s worked a “supplemental” shift floating to various units.

“The units love me and want to know when I’m coming back. It’s great to be like a substitute teacher and connect with patients in different areas,” said McCorkle, 41. “I like being able to provide day to day encouragement.”

It was her new co-workers that came to McCorkle’s side when she received the phone call and heard the words “breast cancer.” They embraced her like she was a family member or lifelong friend.

“I came to work at 8:30 and by 11:30 I was bawling. They were there hugging me and surrounding me with love,” said McCorkle.

“After the diagnosis I was in a state of shock. I didn’t want to face the reality. I went through all the scenarios,” said McCorkle who was diagnosed after a routine mammogram. She knew the chances going into the exam.

In the summer of 1999 she went to a family reunion in Georgia and three weeks later she was back for her Aunt’s funeral. She died of breast cancer. And another Aunt was diagnosed in her 30s. 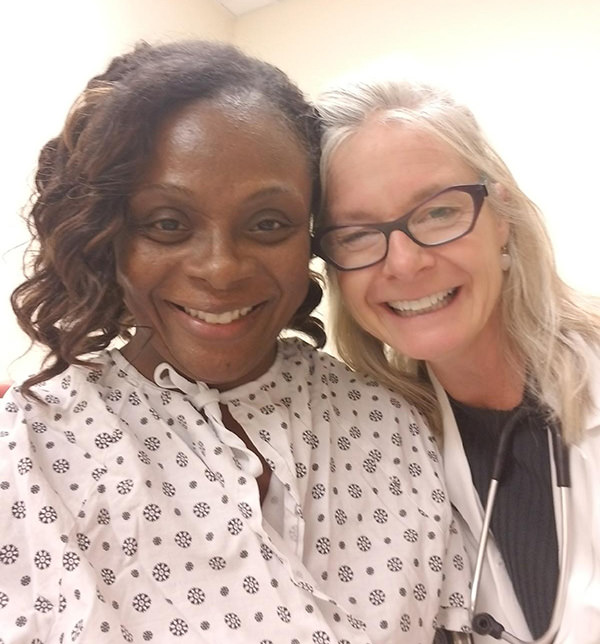 “We wanted genetic testing to determine our plan. I finally agreed to have surgery,” said McCorkle who was under the care of Dr. Kandice Ludwig, Dr. Jennifer Morgan, and Dr. Richard Zellars.

“I feel fortunate to have such a great team. I feel so blessed.”

They caught the cancer early enough that after surgery and six weeks of radiation, she was cleared in April 2016. She continues her doctor visits every three months.

“What my team of doctors discussed is there is a significant difference when African American women are diagnosed with breast cancer. It seems to come younger and attack more aggressively. I tell everyone to get a mammogram early and often,” said McCorkle.

About the same time she was going through her battle with breast cancer, McCorkle’s husband, started dialysis and was put on a transplant list. About 16 years ago he was diagnosed with polycystic kidney disease. The genetic disorder causes cysts to grow on the kidneys. Over the years, the cysts progressively grew larger, said McCorkle.

Married for 16 years, McCorkle met her husband when she was a senior at Ohio State University. She was a single mother raising her daughter and attending school full time on a scholarship. That daughter is now 24 and the mother of McCorkle’s three grandchildren. The McCorkle’s have two younger children too.

In college she lived in student housing and was able to secure daycare but it was still tough.

“I was a senior in high school when I got pregnant. I was an athlete and I was smart,” said McCorkle. “We sort of grew up together in college. Things were chaotic. It wasn’t the best of situations.” A middle school teacher took her under her wing and encouraged her to complete her degree.

“Socialization was different back then. I couldn’t do things with everyone. While my friends were going to games I was working or studying. It wasn’t easy but I accepted it because it was my life.” It took her five years but she completed her social work degree.

People who know her well use words like “strong,” “consistent” and “diligent” to describe McCorkle.

“I don’t give up at all. I just follow through. When I was going through breast cancer treatment I said I didn’t want to be treated as a social worker or an employee. I wanted to be treated as a patient. It helped me learn what that was like – how to cope,” said McCorkle.

Through all of life’s challenges, McCorkle said she’s learned the importance of maintaining balance at home and taking care of herself.

“I think it’s about adapting to a constant frame of learning. You don’t get comfortable with coping. Your coping skills are constantly changing. I’m constantly doing things to improve – running, yoga, Pilates,” said McCorkle.

“The main thing I know is that I don’t feel like I have to have a cape and be a super woman. It’s ok to be me.”