Sniper’s Toughest Fight, His Only Hope

He’s one of seven police snipers in the state of Illinois. He once chased down a pornography suspect and tackled him to the ground, but nothing has been as challenging as Bobby Jo “BJ” Hale’s battle with Type 1 diabetes that led to his pancreas transplant.

“I’ve had a shattered shoulder blade, pins in my thumbs, I’ve worked hard on a farm, but nothing compared to the pain and anxiety of the transplant,” said Hale. But he also didn’t have a choice. He knew he might die without it. The pain was temporary. That was two years ago. Last month, Hale celebrated his 38th birthday and the two-year mark of his transplant.

Diagnosed with Type 1 diabetes at the age of five, Hale had run out of options. He needed a new pancreas. Diabetes doesn’t run in his family but after he experienced an allergic reaction to the childhood measles and mumps vaccine Hale ended up in a coma for eight days. When he came out of it he was told his pancreas wasn’t working and he would be insulin dependent the rest of his life.

“I lived the life a diabetic was supposed to live,” said Hale. “ I had excellent vision, never smoked or drank, and I ate right. But I really noticed a big change in my diabetes about three years before my transplant. The highs and lows were going up and going down faster for no known reason. It was his high school sweetheart – now his wife Cristy, who would look at his eyes and know that it was time for Hale to check his blood sugar. Eventually his endocrinologist gave him a reality check, telling Hale he was so sick that he was unaware of the changes in his hypo glycemic levels.

“My blood sugar would go up and down so fast that the glucose monitor didn’t even keep up,” said Hale. “One minute I’d be at 120 but I’d feel low and I’d check it and literally two three minutes later it would be 42 or 49.” 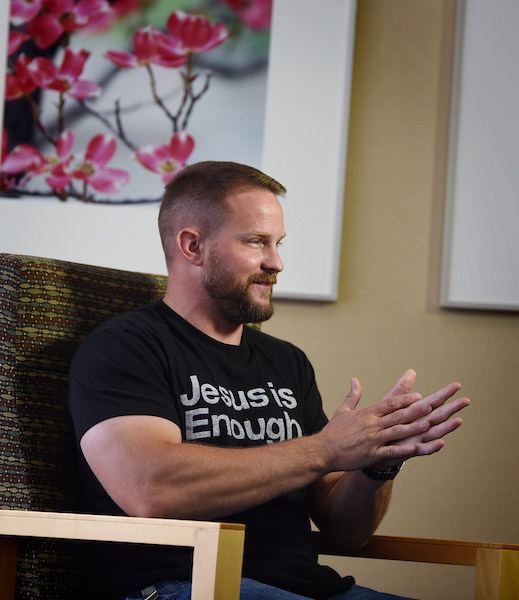 Hale grew up in rural Illinois, a five-hour drive from Indianapolis.

“I was a nerd in high school. I got into fights and was a real punk sometimes. I was one of the least expected kids to grow up to become a cop,” said Hale.

But in 2008, he was in college working toward a criminal justice degree when he received an offer he couldn’t refuse. He became police chief of Cobden, Ill., a village in Union County with about 1,000 residents. He knew his job depended on his health.

He was on a transplant wait list for just under a year when he got the call.

“I was in bad shape that week . . I had talked to my wife about final things. I felt like my life was over. I was checking my blood sugar every half hour,” said Hale. “I was actually thinking, ‘Lord, just give me an honorable death.’ That’s not a rational thought. That’s thoughts from a man who has given up.”

But on the day of his birthday in September, Hale went to church. The town members rallied around praying for him. The next thing he knew, he got the call from his transplant coordinator. He needed to get to Indianapolis fast. A friend brought him to IU Health in his helicopter and he prepared for surgery that same day.

“This was the only hospital that my insurance would allow me to go to. I had done my research and I knew the hospital’s reputation for excellence,” said Hale, a patient of Dr. Jonathan Fridell.

On a recent trip back to Indianapolis for a routine check up Hale said:

“I was told I’d be here for 10 days. Everything went smoothly and the people were awesome. On day five, our wedding anniversary, Dr. Fridell came in and said I could leave. I’ve learned that the patient is the center of the recovery. It’s like family here. After surgery I woke up and Dr. Fridell said, ‘congratulations, you are no longer diabetic. It’s like they were as happy for me as I was.”