The first lesson Jennie Pitman teaches the youngsters in her figuring skating class is this: How to get back up off the ice after they fall.

Growing up in Columbus, Ind., Pitman was on the ice every morning by 5:30. After the early practice, she would head to school and then do it all over again until bedtime.

The sport took her around the world and taught her lessons that she never knew she would need off the rink: Determination, perseverance and stamina – all habits she has practiced throughout her recovery.

Diagnosed with Crohn’s disease, a chronic inflammatory bowel disease that affects the digestive system, Pitman received her first liver transplant July 13, 2005. But the Crohn’s returned, attacking the first liver. She had a second transplant April 29, 2010. She remains under the care of IU Health Doctor Monika Fischer.

As part of her physical therapy, Pitman began swimming and eventually joined other athletes traveling to the World Transplant Games. The sport has taken her to competitions in Thailand, South Africa and recently Spain. 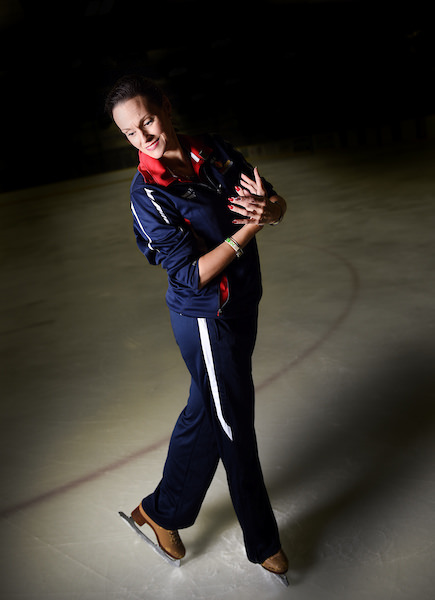 “You’re a part of something you never thought – we’re all survivors we’re tough,” said Pitman, who has taught skating at a camp in Switzerland specifically for children who have undergone transplants.

At some point in her competitive career, she earned the nickname “Pitty,” but this US figure skating triple gold medalist and national collegiate silver medalist wants nothing to do with pity.

In fact, the master-rated figure skating coach earned one of her medals after her surgery for Crohn’s disease and put her liver transplant on hold until she won another gold medal.

“Everything I’ve done . . . Everything I’ve been through, I wouldn’t change a thing. It’s given me a different perspective on life,” said Pitman, who is pursuing a degree in engineering and hopes to continue teaching skating for the next several years.

On her recent return trip from Spain she almost missed her flight in Paris. “Everyone else was in a tizzy and I just remained calm and thought how good life is. There are worse things that being stranded in Paris.”