“The Summer Of Chemo”

The “ABC’s” of Joseluis Gonzalez’ epic are filled with symbols – “A”, for “archway” or an entrance into his journey; “B”, for “bandits” invading the hero’s camp; “C”, for “crystals” used in battle. The “D” stands for “darkness.”

Page after page in Gonzalez’ sketchpad are filled with original drawings – all figments of his imagination and illustrations of his innermost feelings.

“When the doctor told me I had testicular cancer, he said I’m not going to have the best summer. I was looking for a name for my book and I think I found it, ‘The Summer of Chemo,’” said Gonzalez, 19, a patient at IU Health Simon Cancer Center. 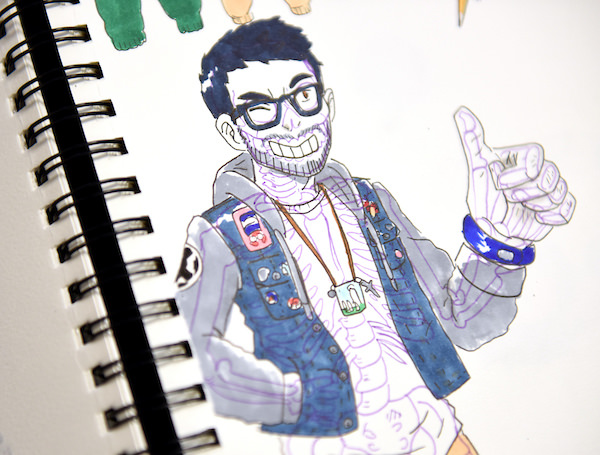 As far back as he can remember Gonzalez has enjoyed drawing cartoons. He thinks it might have started when he watched a Walt Disney production featuring original cel (celluloid) animation, a technique where each animation is drawn frame by frame.

He started drawing dinosaurs at age six and eventually began “doodling” his notes in school.

“I’ve always been good at learning on my own, so I take the audible version and turn it into a sketch to clarify it,” said Gonzalez, a 2015 graduate of Mount Vernon High School who studies criminal justice at Ivy Tech.

Using pen and ink, Gonzalez captures details that might otherwise be overlooked by someone unfamiliar with cancer and chemotherapy. There’s a drawing of sweat pants – he hates wearing sweatpants, but they were his best option after he lost weight. Another sketch includes a big red hovercraft representing the chemo. Sketches of bandits are his interpretation of the search for his veins that were fleeting like bandits. And there’s a drawing of a furry that looks like a mutated monster or a baby bird. Gonzalez drew the image when tufts of his dark hair began falling.

One drawing is of cats and dogs – something that came to him when he fell asleep. He’s pretty sure the dream connects him to his closest companion during his summer of cancer. His Yorkie, “Sher Kahn” has seldom left Gonzalez’ side – even on his worst days when all he wants to do is sleep.

Gonzalez’ “Summer of Chemo” started two months ago. He had been experiencing pain and discomfort for a couple of weeks. He initially thought it might have been epididymitis, a condition he had about a year ago, causing pain in the scrotum and testicle.

“The reason it’s hard for people to go to the doctor is because they think it will get better,” said Gonzalez. “I’m not like that. When something’s wrong, I want answers.”

Testing revealed a tumor and within a week he was meeting with IU Health University Hospital urologist Timothy Masterson and oncologist Costantine Albany. 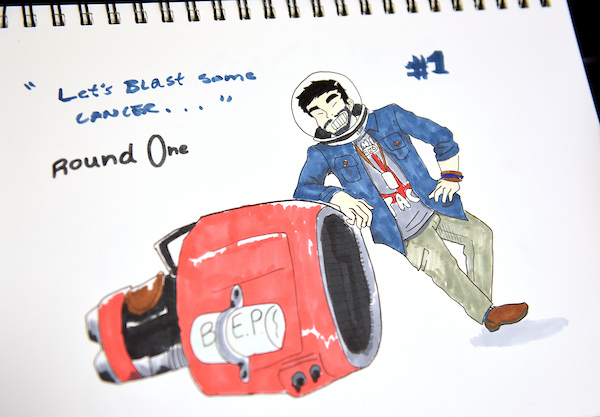 On May 10, the day after his last final, he had surgery to remove the tumor. Two weeks later he started chemotherapy.

“One of the main things that’s helped me is all the doctors have talked to me every step of the way and they have had such a calm and collected way about them,” said Gonzalez, the youngest child of Harold and Elizabeth Gonzalez.

“He’s bigger than life. Anytime he does anything, he does it with faith and family in mind,” said Harold Gonzalez. “His art keeps him engaged in the process and helps him express his feelings.”

For Joseluis, those feelings are as important as the medicine that’s pumping through his veins.

“Maybe this can help others. Maybe it can help children,” he said. “You don’t expect to feel the way you feel physically and emotionally. I’d tell them, ‘It’s OK. You don’t grasp it until it happens,’” said Gonzalez. “I would tell them, ‘don’t think about being sick or you’ll become more sick.’”

In high school, Gonzalez wasn’t a big joiner, but he liked helping others – whether it was hanging out with the international exchange students, or working alongside the environmental club – he always saw himself in the role of supporting his family and friends.

“The hardest part in all of this is having to rely on others to help me. I wouldn’t have wanted this to happen to anyone else in my family because I know my strength and I know I won’t lose it. My Zodiac sign is an ox and I am an ox. I will get through this.”

Gonzalez is already planning life after his last week of chemo. It happens to be fairly close to his 20th birthday. If all goes as plan, he’ll be back in school this fall continuing his criminal justice degree.

“I want to enjoy a big cheeseburger with my dad and I want everything on it,” said Gonzalez. “And I can’t wait get some Dragon spring rolls and shrimp tempura. I look forward to having an appetite and eating what I want.”