Since the day of her husband Ryan's diagnosis, Traci Berg has written in a notebook –dates, reminders and observations. But the ink on the pages of her diary, is not the focus of the Berg family. It’s another decorative journal that serves as the tide that binds the Bergs with their four children including twin boys – Drake and Max aged nine, and daughters Mallory, 5, and Kinsley, 3.

The journal started as an idea by Lisa Rainey, an art therapist with the CompleteLife program of the IU Health Simon Cancer Center. Art therapy is one of several programs that provide physical, social, and emotional, support to patients and their families.

The Bergs fill the pages of the family journal with drawings, questions, and jokes and send it back to Nebraska. Their children, in the care of grandparents, add to the journal and return it back to Indianapolis. The most recent entry from Ryan and Traci was customized for each child asking questions about their favorite foods, colors and sports. 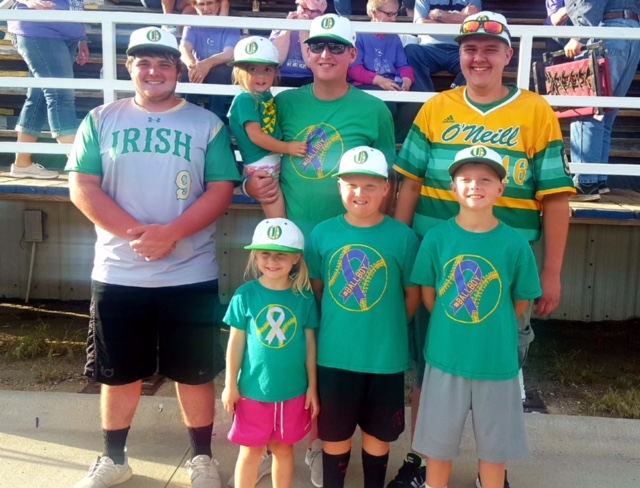 Since early September he has been a patient of Dr. Lawrence Einhorn at IU Health Simon Cancer Center undergoing a high-dose chemotherapy and autologous peripheral-blood stem cell transplant known as an effective cure for patients with relapsed testicular cancer.

It was August 8, 2016 when Ryan Berg received his initial diagnosis. A baseball player since the age of five, he’s spent much of his adult life as a coach for the sport he loves – both for his twin boys and for an 18-year-old league team in his hometown of O’Neill, Nebraska. When he felt pain in his back he initially sought relief from a chiropractor. But the pain didn’t subside, so he underwent testing. A tumor was discovered in his abdominal area and lungs. Twelve weeks of chemo followed back home. The tumor shrunk and the Bergs came to IU Health Simon Cancer Center where Dr. Richard Foster performed surgery in January. The infected lymph nodes were removed and the Bergs returned to Nebraska and their four children.

“Things went down hill from there,” said Traci Berg. Ryan’s lymphatic system was compromised and he was unable to eat solid foods. During those months, the Berg’s community of 4,000 rallied to support the family. Traci, a former teacher, is the head girls’ basketball coach at St. Mary’s Catholic High School, Ryan’s mother, Nancy Berg, retired as a teacher from the school and their children attend the Catholic school.

Ryan and Traci met at the YMCA and were married 11 years ago. Shortly before the birth of their twins, Traci converted to Catholicism. It was a faith that Ryan knew well having served as a long-time altar boy in his youth. Later in life, he served on the church’s finance board, as a lectern, and assisted with communion. Traci also volunteers with the church.

Five years ago, Ryan and Traci moved from Wahoo, Nebraska to Ryan’s hometown of O’Neill. Known as the Irish capital of Nebraska, O’Neill is home to Biglin’s Mortuary. Ryan’s father, Bob Berg served as the funeral director for 35 years and when he retired, Ryan took over the family business.

“We live in a tight knit community. Ryan is a phenomenal funeral director. He has touched a lot of lives. He cares about families,” said Traci.

And the families in O’Neill care about the Bergs.

Stacks of cards sit on a shelf in Ryan’s room at IU Health Simon Cancer Center. But the cards are only a fraction of the support from their hometown. More than 100 people – friends from their sons’ third grade class shaved their heads in support of “Buzz for Berg.” Another 150 people joined in a charity golf outing on a nine-hole course. Others participated in a donut drive – selling 850 dozen donuts - enough to fill the elementary gym.

The Bergs enjoyed a full summer of baseball and Ryan coached his team to state. 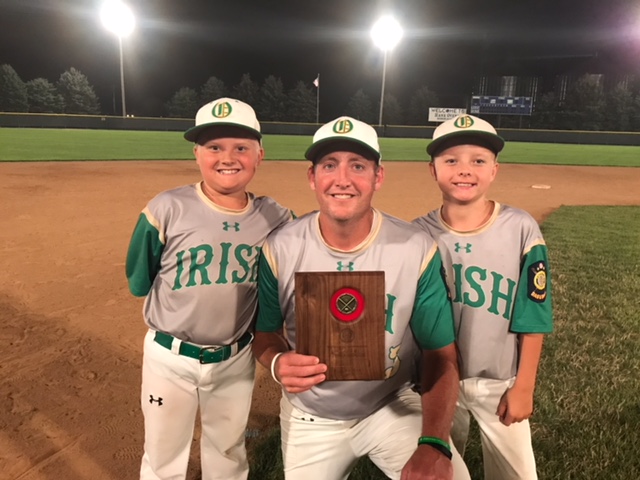 “It was an emotional season,” said Traci. “The team dedicated the whole season to Ryan. “These boys told lots of people they were playing for coach Berg.” Parents, players and fans wore green t-shirts that said “Irish Strong” and included Ryan’s number “33.”

Resting in his hospital bed, Ryan recently paused often to collect his thoughts and explain his emotions. A homemade blanket covers him – displaying pictures of his children and his baseball players. On a cabinet in front of his bed hangs a picture of his children.

“It’s hard. There’s so much time to think,” said Ryan, adding that his strength comes from his faith and his wife who has stayed in Indianapolis by his side since he was admitted to IU Health Simon Cancer Center. They look forward to Face time visits with their children and to receiving the personal family journal in the mail.

“The people here have been fantastic,” said Ryan. “When you come to a big city like this you don’t know what to expect but the nurses and staff have been fantastic and I can’t say enough about Dr. Einhorn. “He’s a trustworthy a guy that you can just talk to so easily. He’s so educated and well known and he doesn’t have to give us the time of day but he’s been beyond nice and down to earth.”