There’s an old saying: A son-in-law’s friendship is like a winter’s sun. On a bitter cold and dreary January 19th, Kenneth “Ken” Day received a dose of that sunshine from an unlikely source - the husband of his only child. 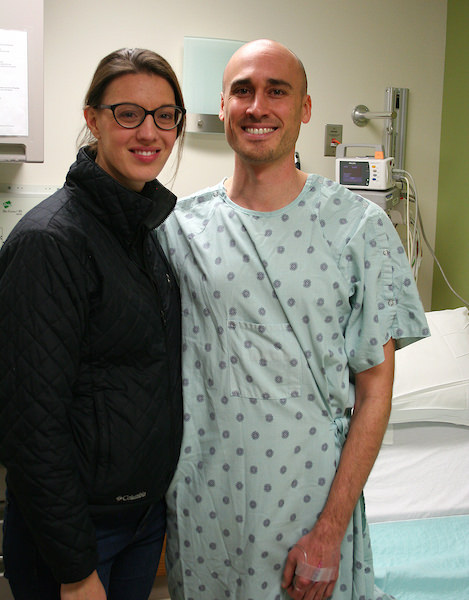 Sam Vonderau and Jessica Day were married six years ago. Ken Day thought it was a good match. He likes his son-in-law but he never thought they’d have another match down the road.

A high school golf coach and former health and physical education teacher for the Tipton Blue Devils, Ken Day was going about his routine, which was sometimes a 14-hour workday. He felt a little tired when he went in for his annual physical but didn’t think much of it. Tests showed an excessive amount of protein in his urine – a sign of potential kidney disease.

For several years after, he was treated at IU Health Methodist and University Hospitals and eventually the disease progressed to the point Day was faced with a tough decision: Dialysis or transplant surgery. His daughter, Jessica and son-in-law Sam Vonderau, also made a decision. They landed jobs with krM Architecture, and moved from San Antonio, back to Indiana, to be closer to family, including Ken and his wife Cyndi, a retired elementary school teacher.

Jessica Vonderau had already been tested, as a kidney donor but wasn’t a match. What Day didn’t know was Sam Vonderau started the testing before they moved back to Indiana.

“There was this sense of responsibility to my family to do whatever it would take to keep everybody healthy and together,” said Sam Vonderau. “Part of what we were going through emotionally was just living so far away. We didn’t really see the progression of the disease and when we realized the extent, we knew we needed to do whatever we could as soon as we could to help out.”

Day’s plan was to move forward with a transplant but he didn’t know the process would take on a life of its own. Two months before his 65th birthday, he got a call from his transplant coordinator at IU Health University Hospital.

“She said, ‘Ken, is there something you need to tell me?’ I had no idea what she was talking about,” recalls Day. His son-in-law also got a call from the transplant coordinator.

On Thanksgiving Day, as the family shared turkey and all the trimmings, Ken Day looked at his son-in-law and asked the same question his transplant coordinator asked him on the phone: “Sam, is there something you need to tell me?”

Things started to click. Ken Day had run into his son-in-law at University Hospital weeks before but didn’t ask questions. They just exchanged smiles and greetings. But on Thanksgiving, when Ken Day asked his son-in-law the question, the answer was like sunshine on a winter day.

“He said he was 98% sure he was going to donate a kidney, but he wanted to make sure he was healthy,” recalls Ken Day. “It was going to be possibly my last chance. There was no one else I could receive a kidney from and I knew I would be doing dialysis.”

His son-in-law had given the process much thought and was made aware of the potential risks but he was prepared for the outcome.

“I made a conscious decision I would have no regrets no matter what the outcomes were. That was the important thing,” said Vonderau. 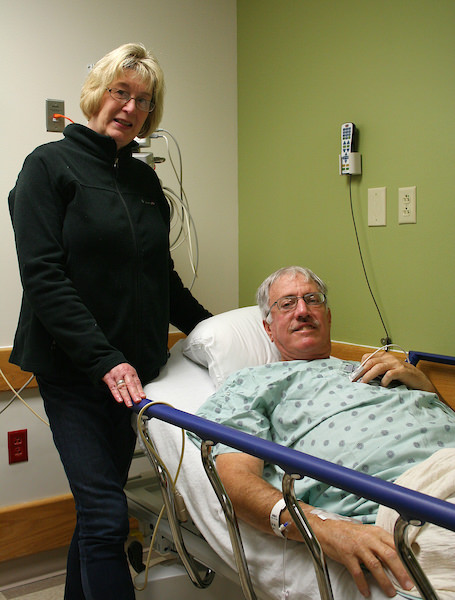 At 7:30 a.m. on January 19th, Ken Day and his son-in-law checked into University Hospital, their rooms side-by-side. They went into surgery about two hours later and after recovery, they rode the same elevator to the fourth floor. Sam Vonderau, 32, donated his kidney to his father-in-law.

“They said I’d be able to get up the next morning and go see Sam, but he was determined to come see me,” recalls Day. “I was sitting there eating breakfast and he came through the doorway holding his pillow. I turned 65 the Tuesday after my surgery and that was my 65th birthday gift from Sam. It was a big gift. I am so thankful and I can’t say enough about Dr. (William) Goggins and Dr. (Muhammad) Yaqub.” Goggins served as Day’s transplant surgeon at University Hospital, and Yaqub has been his doctor for the past five years, specializing in kidney disease.

After his release, Day returned to University Hospital three times a week for follow up visits. During a recent visit to Dr. Yaqub, Day said he is about 95% better.

He’s still not able to lift more than 25 pounds and he can’t do a full golf swing but every day he gets a little stronger. He drinks eight, 19-ounce liquids a day and maintains a healthy diet.

And he also has a new ritual: Every chance he gets, Day initiates a group hug with his son-in-law, his daughter and their 16-month-old daughter, Iley.

“I don’t think we can describe an emotion like this. It’s pretty surreal. The main goal I had was to preserve his quality of life. And one of the motivating factors was to make sure our daughter had a grandfather around and he had the opportunity to watch his granddaughter grow up,” said Vonderau.

“I got a good kidney from Sam,” said Day. “We’ve developed a close relationship and not only is he married to my daughter but now we have something else in common.”